Office of Diversity and Inclusion presentation 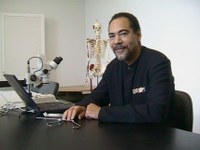 The mainstream of American physical anthropology began as racist and eugenical science that defended slavery, restricted "non-Nordic" immigration and justified Jim Crow segregation. After World War II, the field became more anti-racial than anti-racist. It has continued as a study of natural influences on human variation and, thus, continues to evade the social histories of inequitable biological variation. Also reflecting its occupancy of white space, biological anthropology continues to deny its own racist history and marginalizes the contributions of Blacks. Critical disciplinary history and a shift toward biocultural studies might begin an anti-racist human biology.

Lecture title: “On the Biodeterministic Imagination”

The summary is: Dr. Blakey will discuss the wasted over-emphasis on genetic causes of chronic disease and behavior and there should be increased research on social etiologies.

The objectives are (based on Dr. Blakey’s article - https://www.cambridge.org/core/journals/archaeological-dialogues/article/abs/on-the-biodeterministic-imagination/071C10B5DFB4F92D653190211FC177ED):

Join the lecture via this link: https://tinyurl.com/4jjs3jx3